Founder Radio DJ “Gerard Valkhof” was by the late seventies a late evening dj at a radio station in Ghent Radio Atlantis Gent. 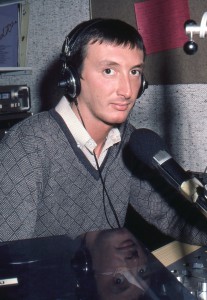 After a radioshow with John Massis (+) they decided together, to start there own radio station.

The motive , that was according to them, in Ghent there was not any radio that brought quality. John Massis had already reported several times through the national radio “BRT”, that people should be entitled to free speech through the media.
Because broadcast FM radio was illegal in the seventies , it was also difficult to buy a FM transmitter.
Somewhere in a pub in Flanders , they could buy for a low price , a 5 Watt transmitter, 2 record players, 1 tapedeck, Rodec audiomixer, …
The initial capital was presented by John Massis who was financially responsible in the initial period. 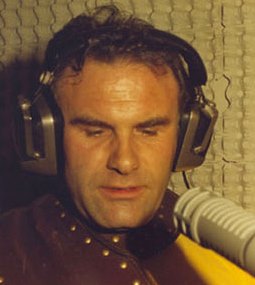 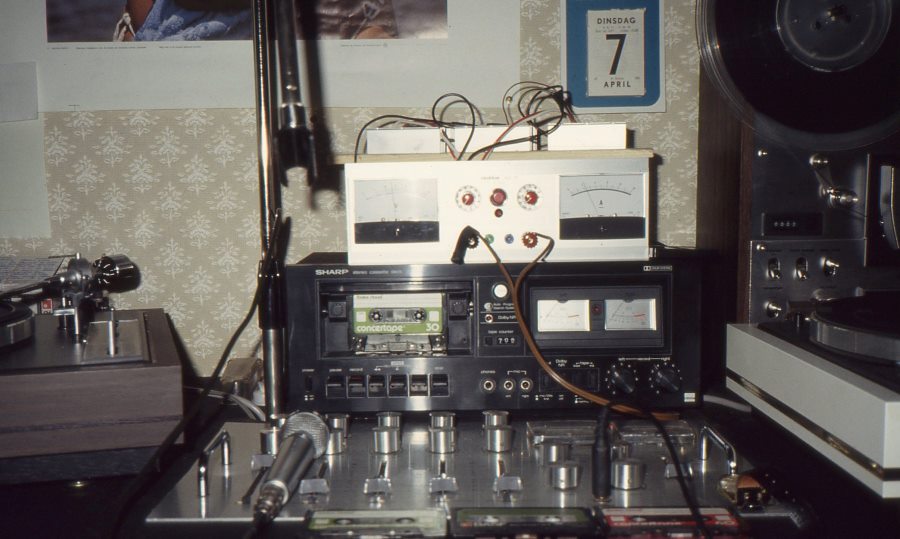 Chosen was the name “Superstar”, which is quite logical, namely John Massis was a living proof of a “Superstar”.

The first test broadcast was on October 10th, 1980. It was told on air “This is yours free radio for Ghent , live from Brussels”. This, of course, in order that it was illegal to transmit and hoping that no one could locate the studio location in time.
To the investigators of the former RTT even more misleading was a post office box address given in a little town , Ruiselede 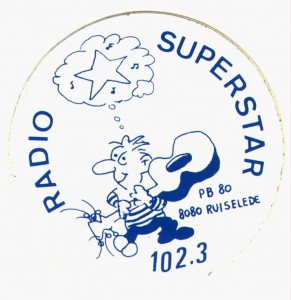 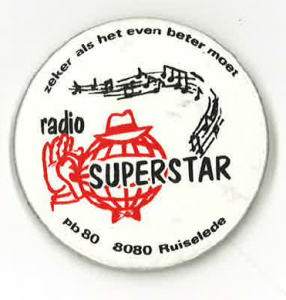 After some transmissions on frequencies 100.00 MHz and 101.00 MHz, was finally chosen in 1983 for 102.3FM.
This frequency remained in use until the late 80s. Then a legal permit was obtained and the 107.7 FM became the new frequency for Radio Superstar.

In the beginning there were only a few hours a week of broadcasting.
Late October 1980, began on Wednesday a weekly program of five hours. The first employees were mostly friends and relatives.

The FM transmitter , a small 5 Watt stentor selfmade in a little box and a antenna mounted on a platform of the 17th floor outside the radio studio of the apartment building. Because of the many concrete of the building, Radio Superstar could only be heard at the southwest area of Ghent.
The name changed a while to Radio Superstar Drongen (Drongen = little city southwest of Ghent) 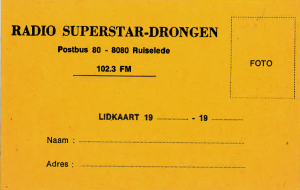 Already in 1980 the 5 watt transmitter was confiscated.

In December 1982, the new into operation taken 50 Watt Pascal- crystal transmitter was sealed by the Flemish inspection service.
There were complaints that the aviation band harried, but after a few days the transmitter returned. Here copys of newspaper “Het Volk” and “Nieuwsblad” , in those days “special news”. 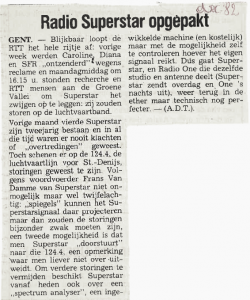 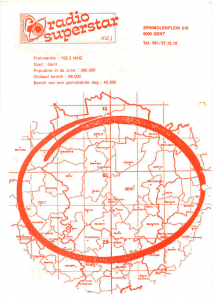 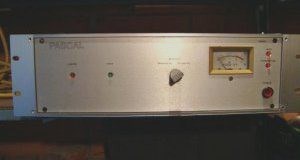 The cash receipts came in early days from membership cards and the radio roadshows. Occasionally a retailer made a contribution, in exchange for naming his business on the radio.
There were also activities such as car quests, hiking, cycling, and sound mix or playback music competitions, sporting events, etc ….

Yearly there was a Radio Superstar event, for the listeners with great food and musical performances by famous Flemish and Dutch artists. 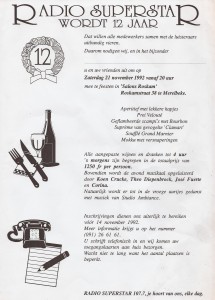 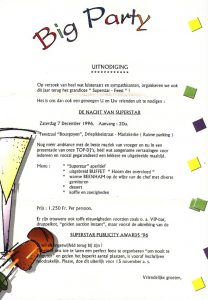 Also all kinds of assistance actions were organized, such as “Mensen Helpen Mensen” (people helps people). This was a fundraising in collaboration with the relief fund, to help poor people of Ghent around Christmas time.

During the January storm in the early nineties the thirty meter high mast broke off at our location Groene Vallei. Only the antenna wiring was holding the mast, snapped firmly on the edge of the 50 meter-high apartment building. The management board then chose a storm-proof setup and moved the transmitter and antenna to a 68 meter tall apartment building. 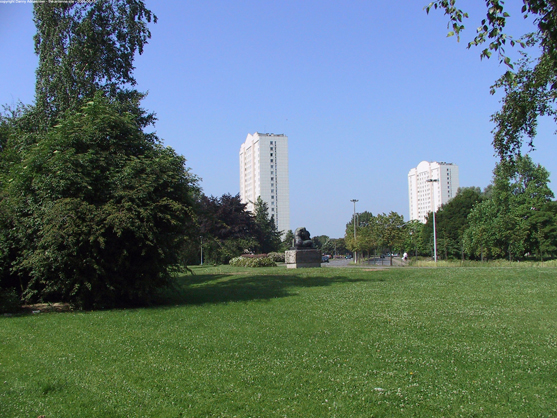 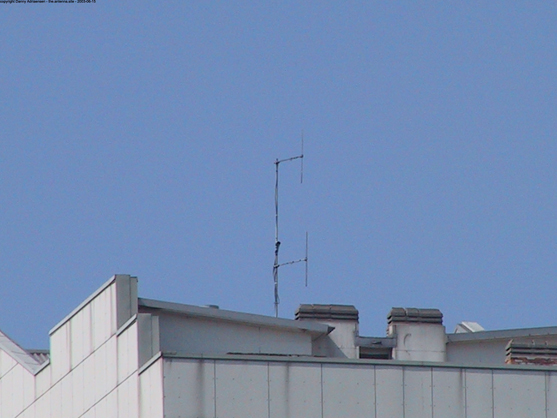 This arrangement has been used till 2004 and is still in use by another radiostation. Because now of the distance between the radio transmitter and studio, radio superstar was the first radiostation that used an audio signal line from the Belgian phone company. Meanwhile, the broadcast schedule was extended to a programming day from 8:00 to 20:00. 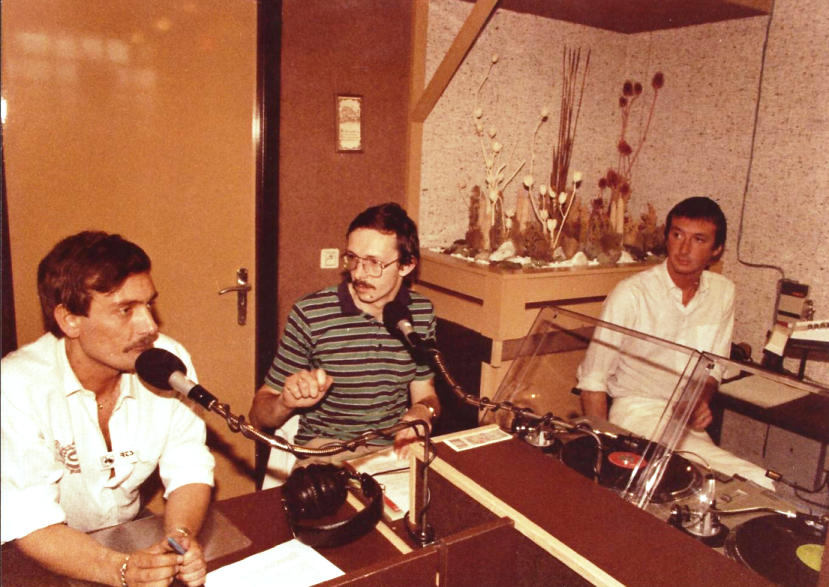 The popularity of the radio was so great, that around 1982, founder John Massis wanted to start a Televison station. The press was regarded and Radio Superstar was then promptly converted to RTS Radio Television Superstar. 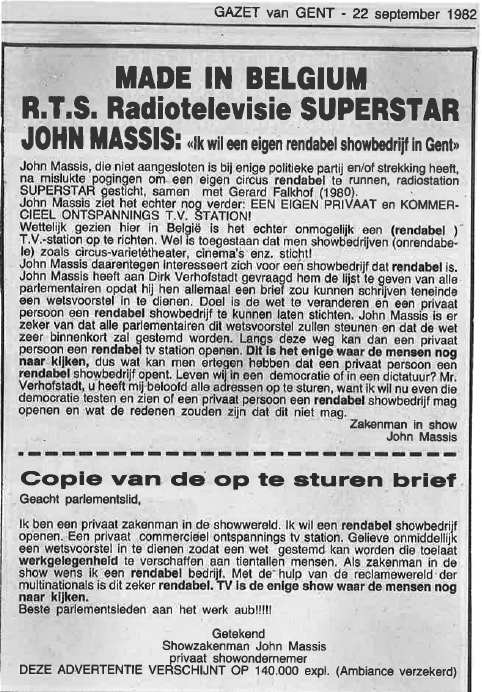 Television broadcasts,… however, never been there, yet the station remained for a while as RTS.
End 1982, decided to return to broadcast the name Radio Superstar and the frequency 102.30 MHz was then shared with another on air popmusic radiostation Radio One. Thus, the costs of maintenance studios were shared.

Radio Superstar broadcast from 7:00 to 19:00hrs. Radio One took over the remaining twelve evening and night hours.

Around 1989 , both stations signed a contract with the French broadcast organisation SIS (Station Indépendante Satélite). But very soon after the stop of the organisation One and Superstar decided to go their own way back.

There then followed for five years, a difficult period for Radio Superstar. About half of the employees and representatives, chosen for Radio One, which continued to use the name Radio SIS with a license for 24 hours a day on 102.8 FM . This station turned to dance music and would later be renamed Topradio.

Radio Superstar stayed in the same studios and begin to broadcast , 24 hours a day on 107.7 FM.

The new jingle package “je hoort van ons elke dag (you hear us every day)” sounded in many living rooms. 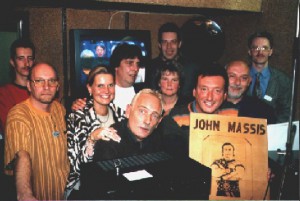 By pecuniary difficulties around the year 2000, the frequency 107.7, was shared for the 2nd time. A schoolradio from the University of Ghent , callname URGENT used the evening and night hours. This collaboration lasted until URGENT was assigned its own frequency in 2004.

In the spring of 2003, Radio Superstar still remaining the only fully independent cityradio of Ghent. The board then decided to renew the radio. The beginning of the summer holidays became the time to change and refresh with a new jinglepackage “De kracht Van Muziek (The Power Of Music)”. Some 80% of the old jingles were then classified definitively.

Also completely changed the dj schedule . Every weekdays changed to ” The News Radio” . All day long non stop music with 4 news flashes .Between 12:00 PM and 13:00 PM “Middagpauze” with local city news , and in the afternoon John Van Den Driessche (+) with the program “Kracht Van De Middag ”, great music and news.

Over the weekend there were from early morning to midnight live program ranging from 60s 70s oldies hear on Sunday, dance music on Saturday, upbeat on Saturday evening and even a gay program on Sunday evening. 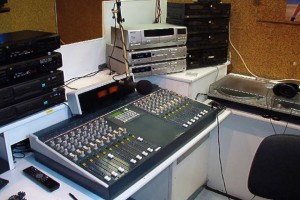 Broadcast studio used by Superstar, Radio One en SIS in the nineties. Used until closing down in 2004

End of a radio period – closing down :

Due to the intense competition from national and regional stations in early 2004, we conceived the plan to renew the radio and change the name to SunFM.
However, the crisis had revenues of the past few months so determined that there was soon to find a new radio partner.

And on Sunday, April 19th, 2004 it was finally done with Radio Superstar . After a “last hour” began at 12:00 PM the broadcast of MaevaFM . Only a technician stayed to keep everything going on.

However, cooperation with MaevaFM 104.9MHz was short-lived and the board decided definitively to closing down the station in the summer of 2004 ,….

Radio Superstar Gent 107,70 FM was the last independent radio in Ghent and was a household name in the world of radio. The radio station ever worked on their own and were therefore independent of third parties. Radio Superstar evolving from a family radio in the early years 80/90s to a new radio where music was interspersed with news, weather and sports.

October 2014: Radio Superstar is back as  internet webradio.

The possibility of Superstar employees from the first hour to restart the station by streaming on the internet is a fact.

Erwin De Gooyer will be back in early 2015 and will start programming in consultation with a  24 hours weekend schedule  .

Gerard Valkhof is also added that year, who is on the one hand the program maker and on the other hand provides the financial input.

From September 2015, start of 24 hours a day  broadcast .  From Monday to Friday there is 24 hours non-stop radio with hits from the past 50 years and in the weekend , programs presented by the dj’s .

There is also a theme weekend regularly (see mixcloud Radio Superstar for re-listening of these programs).

The Facebook page is expanded in 2018 with “Radio Superstar Facebook group”. Joost De Ridder is committed to this as a moderator.

However, due to a low expected number of listeners and the financial costs that are involved ,  it is decided at the end of June 2019 to stop the broadcasts as of 1 August 2019.

Possible further continuation of the radio by other employees is opted for, but without any further  action for the moment .